The final round of the 2019 Battlewin Premier League has arrived with a huge Saturday night clash at Pluim Park headlining the action! The round 22 fixture list is as follows: 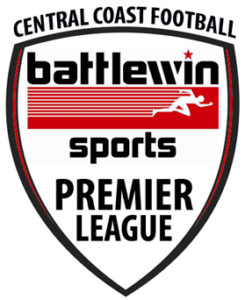 Killarney and Woongarrah face-off at Pluim Park on Saturday night as the sides battle it out for the Battlewin Premier League ‘League Championship’. After leading the competition for the majority of the season, Killarney’s loss to Wyoming last weekend saw them surrender their lead to the Wildcats as the competition enters its final regular season round. The Terriers recorded a 3-0 victory over Woongarrah when the sides last met in early June, a result they’ll need to repeat if they’re to add another league championship to their trophy cabinet this weekend.

In what has been a tremendous debut season in the Battlewin Premier League, Woongarrah FC have the opportunity to become the first ever newly promoted side to win the league championship in the Mens Premier League when they face Killarney at Pluim Park on Saturday night. A narrow 1-0 victory over Southern and Ettalong United last weekend saw the ‘Cats take top spot on the BPL table. Holding a one-point lead over the Terriers, Woongarrah simply need to avoid defeat on Saturday night to wrap up the title. In a boost for the ‘Cats, Jamie Bartlett is eligible for selection after serving his suspension as the side look to extend their unbeaten run to 11 matches. Coincidentally, the side haven’t lost since their last meeting with Killarney on the 2nd of June.

Southern and Ettalong United host Toukley at James Browne Oval on Sunday afternoon with their focus firmly set on avoiding the BPL’s elimination final (4th vs 5th). After occupying the league’s top two for a majority of the 2019 season, last weekend’s narrow loss to Woongarrah saw them fall to fifth place, although their place in the finals was secured based on other results around the competition. In all likelihood the Lions can finish as high as third, with just one point separating themselves, Wyoming, and Terrigal United ahead of the final week of the season.

Toukley had their relegation to the Division One competition for the 2020 season confirmed last weekend as they now look to end their BPL stint with a positive performance at James Browne Oval on Sunday afternoon. As would be expected given the circumstances, the Gunners played a weakened side in first grade as they looked to ensure maximum club championship points in the lower grades last weekend, resulting in a heavy loss to Terrigal United. Toukley will look to pick up their first points in eight weeks this weekend before they turn their focus to the 2020 season and a hopeful promotion bid.

Currently third, Terrigal United appear to be the most likely of the BPL’s top five to disrupt the top two positions come the premier leagues final standings at the conclusion of this weekends matches. A massive 10-1 win provided them a significant boost to their goal-difference, keeping the door ajar for a possible top two finish should Killarney not pick up maximum points on Saturday night. They would, of course, still be required to secure three points in their match with Avoca this weekend. Famously, the last time the sides met they played out a manic 4-4 draw, in which Avoca led 3-0 inside 10 minutes. A win is the only result that will guarantee Terrigal a spot in the qualifying final, any other result and they’ll have to rely on the rounds’ other matches falling their way.

After stringing together a spirited late season run at a finals position, back to back losses saw Avoca’s finals bid come to an end last weekend. Last Sunday’s 2-1 loss to The Entrance ended any hopes the Sharks had of securing a top five position come the final round of the BPL season. Avoca conclude their season with this weekend’s trip to Duffy’s Oval where they’ll look to secure sixth position on the BPL table. 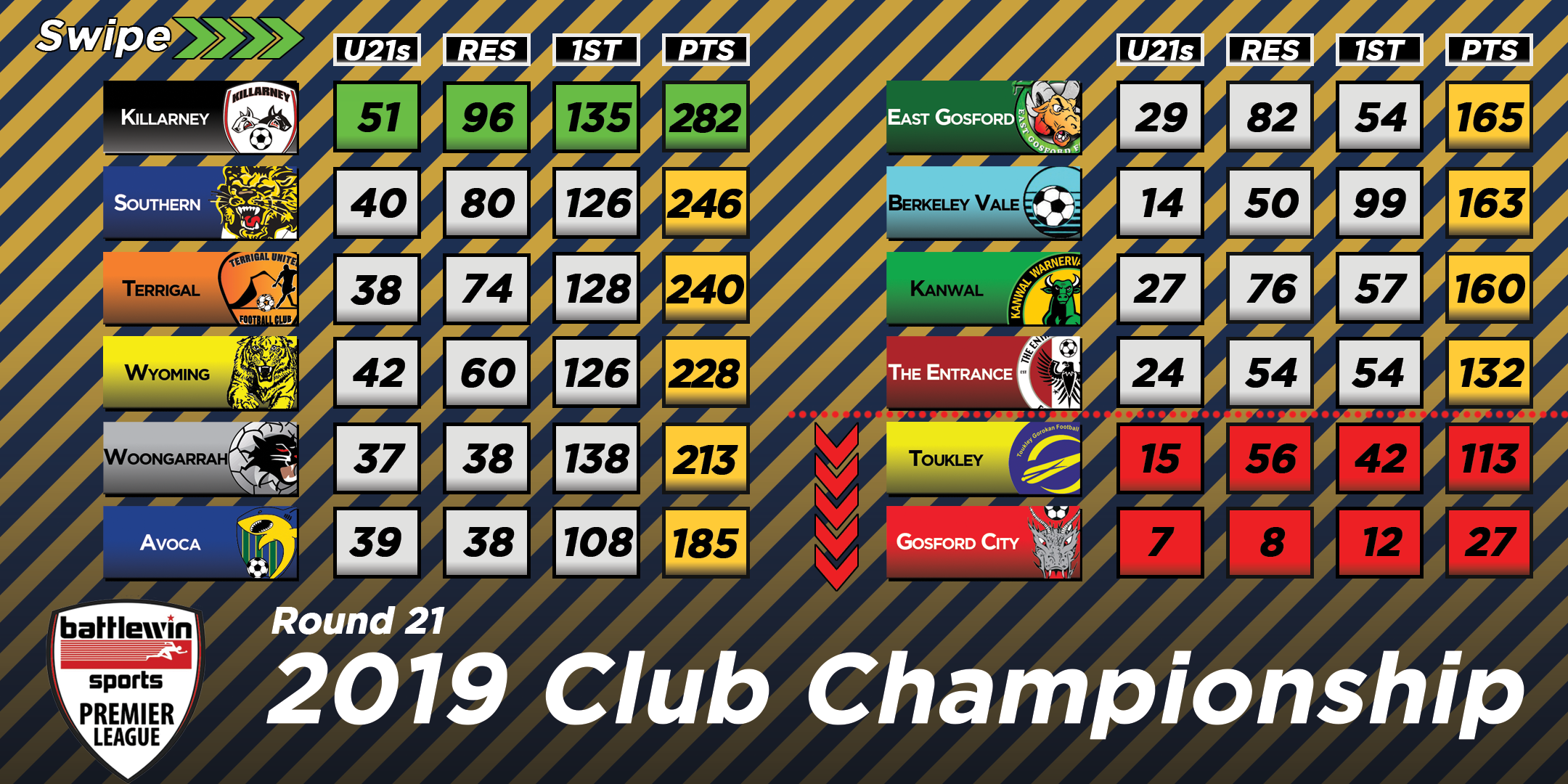 Fresh from securing their position in the Battlewin Premier League for season 2020, The Entrance round out the 2019 season at Pat Morley Oval as they host the East Gosford Rams. Wins in all three grades against Avoca last weekend saw the Sea Eagles establish an unassailable 19-point club championship gap between themselves and Toukley in the final relegation place, allowing them the peace of mind that their position in the top-flight is secure regardless of Sunday’s results. Last weekend’s win over Avoca capped off a great three weeks for The Entrance who managed to pick up 7 points from a possible 9 as they look to go one better this weekend than the 0-0 draw they managed against the Rams earlier in the year.

Locked on 18 competition points with Sunday’s opponents, the East Gosford Rams will be looking to wrap up eighth position on the Battlewin Premier League table when they meet The Entrance on Sunday afternoon. A 2-0 victory over Gosford City last weekend saw the Rams pick up their first victory in five matches as they look to finish the season with back-to-back wins for the first time this campaign.

Gosford City conclude their latest stint in the Battlewin Premier League with a home tie against Berkeley Vale on Sunday afternoon at Gavenlock Oval. With their relegation to division one already sealed for next season, the Dragons will look to put in a positive display, similar to the one they turned in last time the sides met, against a Berkeley Vale side who’ve been eliminated from finals contention. In the aforementioned earlier meeting, Gosford City went down 3-2 to the ‘Bats at Mingara.

A 3-0 loss to Kanwal last weekend saw Berkeley Vale’s hopes of a finals berth put to an end, with the side winless in their last four outings. Requiring a win last weekend and other results to go their way, last year’s grand finalists ultimately came up short. They could still secure sixth position on the BPL table with a win over Gosford City this weekend, providing Avoca emerge empty handed from their clash with Terrigal United.

After securing back-to-back wins for the first time this season Kanwal clash with a finals bound Wyoming side as they look to hang onto eighth position on the BPL table. After showing signs all season long the Bulls have finally seen a few results fall their way over recent weeks, with a win this weekend seeing the side conclude the season with four wins from their last five matches, a run of form rivalling sides occupying the competitions top-five. The Bulls will be expecting a tough match this weekend as their opponents look to secure a position in the qualifying final next weekend.

Wyoming have responded well after encountering a string of tough results, recording four straight victories, crowned by last weekend’s dramatic 3-2 victory over Killarney at Alan Davidson Oval. With a position in the top five secured heading into the final weekend, the Tigers will be looking to try and leapfrog Terrigal United into third position and a spot in the qualifying final, rather than the elimination final. Wyoming, like Woongarrah, have enjoyed a successful return to the Battlewin Premier League and will be looking to put together a good performance this weekend as they gear up for the final’s series beginning next weekend.