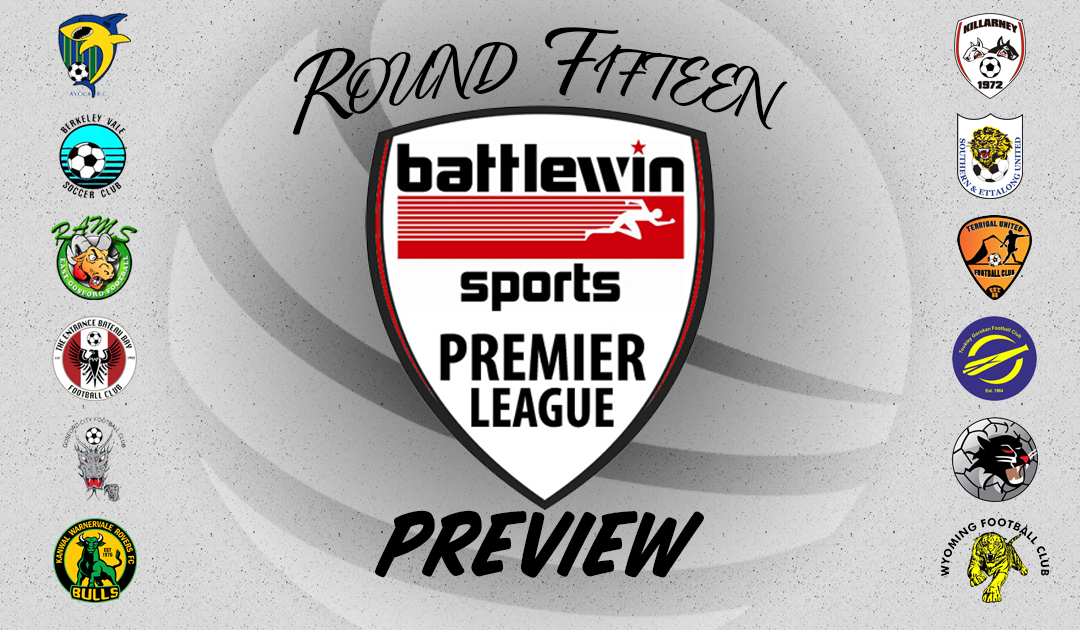 Round fifteen of the Battlewin Premier League is set to play out this weekend, with a particularly big clash between Woongarrah and Berkeley Vale on Sunday afternoon the salient fixture.

The Battlewin Premier League round fifteen fixture list is as follows: 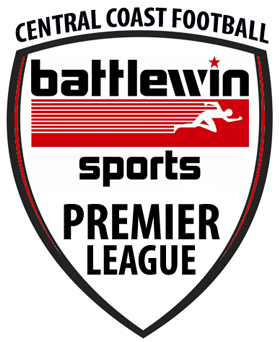 Avoca return to Pluim Park on Saturday afternoon, aiming to build on last weekend’s weather interrupted victory over the East Gosford Rams. The Sharks managed four goals by the 61st minute mark when the match was abandoned by the referee due to the poor weather conditions that swept across the coast last Sunday afternoon. Given the 4-0 scoreline and the opposition having been reduced to eight men, it was determined that the result would stand, leading to the Sharks first win since the end of May. The win kept them within five points of a finals position however they’ll face a tough test to cut that deficit again when they take on the in-form Wyoming Tigers on Saturday afternoon. The last time the two sides met ended in Avoca’s biggest defeat of the campaign, going down 8-2, the loss that subsequently kick-started the sides seven match unbeaten run. The Sharks will be hoping for a significantly improved showing this time around as they look to keep their finals hopes alive.

Wyoming stole a march on finals rivals Southern and Ettalong United to take control of second position on the Battlewin Premier League table after their tough 1-0 win over Gosford City last weekend. The win, their 10th of the campaign, sees them join leaders Killarney as the only sides to reach the mark so far this season. Unbeaten in their last four, the Tigers will be looking to repeat the effort that saw them run out big 8-2 winners back in round four, a match that saw Pat Mills net an incredible six goals. A win on Saturday night would see the Tigers take top spot on the BPL table, for the best part of 24 hours at least, an incredible achievement for the club promoted from the Division One competition last season.

Southern and Ettalong United return to James Browne Oval for the third week in a row as they host Gosford City on Sunday afternoon. Coming off the back of a disappointing 6-2 loss to Terrigal United last weekend, the Lions will be looking to return to winning ways as they host a struggling Dragons outfit. The loss to Terrigal was their first in six weeks, and just their third of what has been a largely successful season to date. The side will be without both Jacob Caban and Jack Ellwood who are suspended for the weekend’s fixture, although they will welcome back striker Keith Gumbs who is eligible for selection once again after serving his suspension. The last time these two sides met saw Southern blow their opposition away in the second half, with a Keith Gumbs’ brace complimented by goals to each of James Caban, Sam Matthews, and Todd Balneaves.

A narrow defeat to rivals Wyoming saw the Dragons sink to their fifth straight defeat last weekend as there hopes of remaining in the premier league continue to fade. Defeat in all three grades saw them lose ground in the fight to beat the drop, as they begin to run out of fixtures to do so. A much improved first grade performance against an in-form Wyoming side last weekend bodes well for the remaining eight fixtures of the season as the club looks to mount an unlikely finals charge. This weekend’s clash is the first of just three remaining fixtures against top five sides, indicating a number of high-stakes games remain for the Dragons this season, the first of which looks to be next weekend’s massive clash with The Entrance at Pat Morley Oval.

Leaders Killarney face eleventh placed Kanwal at EDSAAC on Sunday afternoon as they look to extend their lead atop of the Battlewin Premier League. The Terriers were unable to play out the 90 minutes of last weekend’s clash with Toukley, with the referees abandoning the match at half time after conditions deteriorated considerably throughout the opening 45. The Terriers found themselves up 3-0 at the time of abandonment on the back of two goals from top-scorer Daniel Rodger, however the match will be replayed at a later date. Killarney’s trip to Wadalba earlier in the season certainly produced a cracking match, with the side fighting back from 2-1 down to snatch a 3-2 win right on full-time. They will be without both Brendan Hall and Andy Klijn once again as they continue to serve suspensions.

Kanwal enter the weekends clash on the back of two relatively positive performances, taking points off both Terrigal United and Woongarrah over the last two weeks. The consecutive 2-2 draws have proved vital in the Club Championship table with the Bulls opening up a nine-point gap between themselves and the relegation places. This week’s match with Killarney is the last of a run of four weeks of top six opponents, with the Bulls next five matches against sides in the bottom half of the competition. The side will be looking for a repeat effort of the last meeting between the sides as they look towards a strong finish to what has been a disappointing season thus far. Terrigal and The Entrance face off at Duffy’s Oval on Sunday afternoon as Terrigal look to close in on the top positions on the premier league table. Terrigal extended their unbeaten run to seven matches after hammering Southern and Ettalong United at James Browne Oval last weekend, a win which saw them move within two points of second placed Wyoming. A routine 3-0 victory saw Terrigal claim the points last time these sides met back in round four, also at Duffy’s Oval. Matches with Woongarrah and East Gosford follow the clash with The Entrance this weekend, before Terrigal face their return fixture with Killarney, the fixture that started their current unbeaten run.

The Entrance suffered another difficult weekend after going down to Berkeley Vale across all three grades at Mingara last weekend. The first-grade side were unable to repeat the performance that saw them claim a 1-0 victory in the previous meeting, and subsequently continue to maintain just a five-point buffer between themselves and the relegation places on the Club Championship table. Currently in tenth position on both the BPL and Club Championship table, The Entrance are in desperate need of points to stave off the relegation places, however having collected just two across their last nine matches, form suggests it will be a tough ask.

The Gunners face East Gosford at Harry Moore Oval this weekend in what shapes as another big clash in their bid for premier league survival. After having their first grade match abandoned last weekend with Killarney, the Gunners remain in the bottom two on the Club Championship table, five points adrift of tenth place. The weekends match looms as a great opportunity for the Gunners to pick up crucial points to see them climb out of the bottom two, especially given their last four fixtures of the season are against legitimate finals contenders. The last time the two sides met saw Toukley scrape a narrow 1-0 victory, however they’ll head into the weekends clash without number nine Mitchell Harper whose suspension sees him sit the match out.

The Rams head into this weekend’s clash after a chaotic match last weekend with Avoca, of which was abandoned after 60 minutes due to the weather. Finding themselves down both four goals and three men at the time of abandonment, it was determined that the result would stand. After back-to-back losses, the next two weeks provide the club the opportunity to climb the BPL ladder as they face fixtures with both the Gunners and Kanwal. The Rams will be looking to return to the winner’s circle however will have to do so without Paul Crisp, Beyhan Irmako, and Jamie Kabbout who are all serving suspensions from last weekend’s clash with Avoca.

After last weekend’s last-minute draw with rivals Kanwal, Woongarrah return to Hamlyn Terrace on Sunday afternoon looking to pick up what would be just their second win in their last six fixtures. After conceding in the final minutes of last weekend’s derby clash, the ‘Cats will look to bounce back as they face a Berkeley Vale side positioned just one point above them, currently occupying the fifth finals position. The last time the two sides met the Wombats ran out 2-0 winners, but this weekend’s clash looms as a big one for both sides in the race for the finals, so expect an extremely competitive match.

Berkeley Vale will be looking to shore up their position in the top five at Hamlyn Terrace on Sunday afternoon as they look to complete the double on Woongarrah this season. Two goals from centre-half Damien Lobb proved enough to secure the three points for the ‘Bats in round four, with the defender returning from suspension for this weekend’s match. In another boost, Wombats striker Troy Mumford returned from two weeks off with a goal last weekend, scoring in his last two appearances. A win at Woongarrah this weekend would provide the club with a huge boost heading into next weekend’s clash with Killarney, this season’s second edition of last year’s grand final. 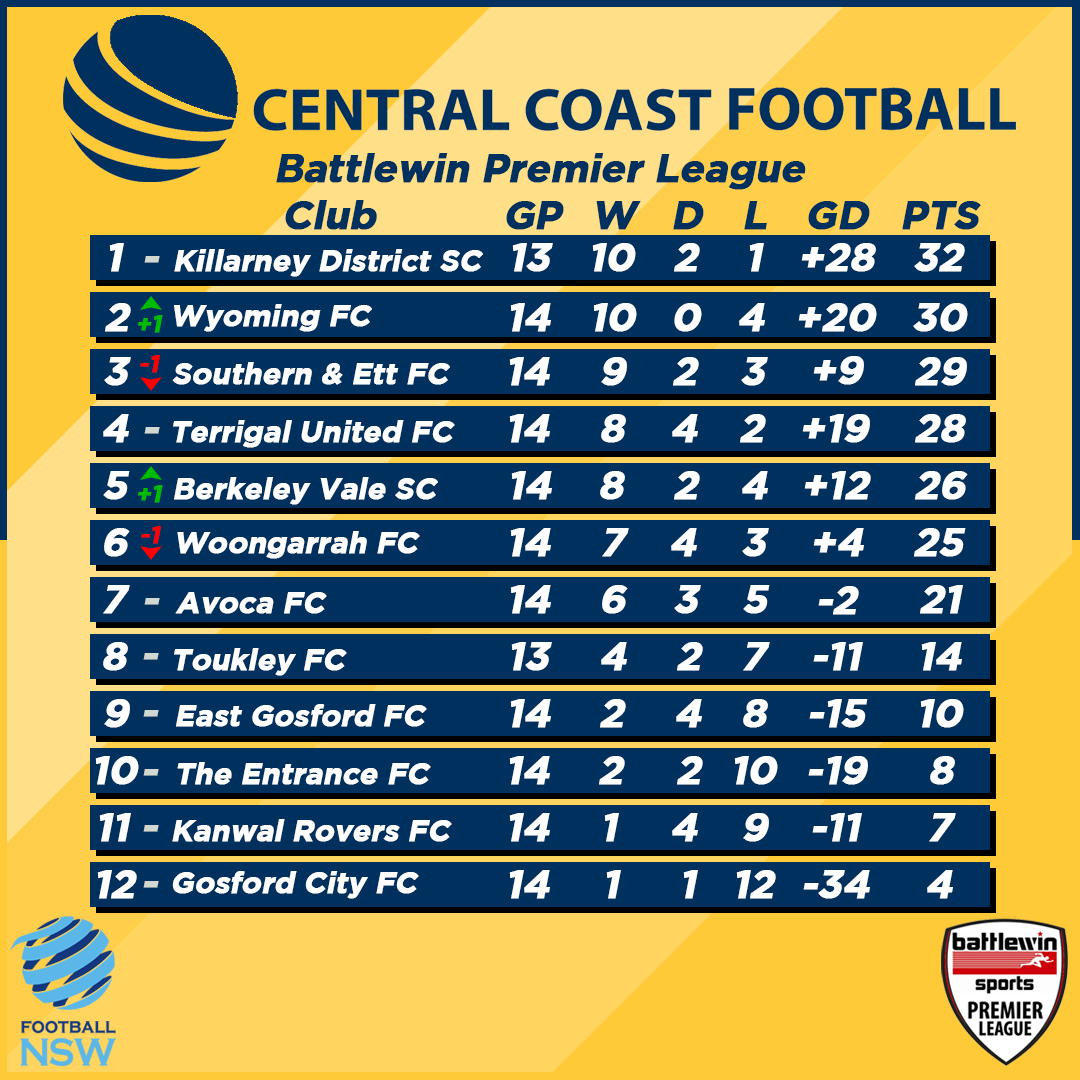